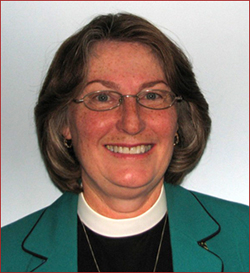 My husband and I are Philadelphia natives who first met in high school. We have been happily married for 39 years. We are the parents of three wonderful young adult children, Michelle, Kristen and Brandon, and the very proud grandparents of Liam and Grace. Michelle is employed as the Senior Sports Director for Special Olympics Pennsylvania; Kristen teaches history at the Church Farm School, an Episcopal school in Exton, Pa., and Brandon is a painting contractor and volunteer fire fighter. After 33 years of civil service, Gerry accepted an early retirement package from the City of Philadelphia where he last served as the Manager of Computer Operations for Common Pleas Court. His retirement has left us free to consider a move to Florida, a state where we have vacationed often.

I had been serving as the rector of The Church of St. Jude and the Nativity in Lafayette Hill, a suburb of Philadelphia, for the past seven years. I accepted this call while completing a Master of Divinity degree at General Theological Seminary in New York. I am what is known as, “Second Career Clergy”. Prior to ordination I worked for twenty-four years as a School Psychologist, twenty in the School District of Philadelphia, and four years as an Early Childhood educator. I hold certifications in psychology and education, and I also have a Master of Education Degree, Magna Cum Laude, from Temple University.

Both my husband and I were raised Roman Catholic. Since my childhood I have been very devoted to God and active in the church. At the age of thirteen I became involved in liturgy planning and I began playing the guitar for youth masses. My present love of liturgy developed during my teenage years. As a lay adult I served in many parish ministries including Altar Guild, Lector, Eucharistic Minister, Music Minister, Christian Educator, and I also served in Campus Ministry at Temple University and the University of Pennsylvania. I left the Roman Church in 2000, after many years of struggling with God over, what I believed to be, a call to ordination. It was a very difficult time in my life but I remain eternally grateful that my husband and I were found by the Episcopal Church. (It’s a pretty crazy story which I would be happy to share.) I was immediately put to work when I joined an Episcopal congregation and I was lifted up for ordination after being a member for only one year. Since I had a full-time job and teenage children to rear, I took the long road to ordination, i.e., I attended seminary part-time for many years while I continued working and caring for our children. With the support of family and friends, and many, many blessings from God, I was ordained a deacon in June, 2007, and a priest in December, 2007, in the Diocese of Pennsylvania.

I love being a priest, and I thank God every day for calling me to ordained ministry. Since I am so dedicated to my work, I sometimes find it hard to maintain a balanced life. I am though very grateful for my family and the time we can spend together, and I additionally enjoy traveling, camping, kayaking, reading, playing the guitar, singing, and walking on the beach. If I am not at St. John’s or at home, I will most likely be enjoying one of the beautiful beaches in the Clearwater area. If Gerry is not at St. John’s or at home, he will definitely be out fishing or attending a Phillies game.

Until we meet, know that I hold you in prayer each day. Please keep Gerry and I in your prayers.